While the core team is working hard on launching a public testnet, more than 300 members participated in release 3.2a ‘Coda Sandbox’, which launched on Monday, April 20th. For two weeks, the users participated in challenges, racked up over 500,000 testnet points* together on the Testnet Leaderboard, and increased their chances to become eligible for the Genesis token program.

In release 3.2a, users used Docker to spin up a single-node private network on their machines, and became competent to carry out core Coda functionalities, like sending transactions, creating zk-SNARKs, and producing blocks. They also tested new features, such as the Graphical User Interface (GUI) Wallet, a Javascript Client SDK, decimal-ed tokens, etc. and provided the team with valuable feedback — read on for more details.

The ‘Coda Sandbox’ was a helpful stepping stone towards the next, interactive testnet release. If you’re ready for a more chaotic (and fun) experience, then sign up to join Genesis and get notified when the public testnet goes live next!

Coda swaps the traditional blockchain for a tiny cryptographic proof, enabling a cryptocurrency as accessible as any other app or website. This makes it dramatically easier to develop user friendly crypto apps that run natively in the browser, and enables more inclusive, sustainable consensus.

However, members who played with the ‘Coda Sandbox’ noticed that it had high CPU requirements. The reason is that creating zk-SNARK proofs and compressing the blockchain requires computing power. And since the sandbox node is the only node on a private network, it’s running 2 different SNARK proof creators at the same time: block production (the blockchain SNARK) and SNARK worker (the transaction SNARKs). Anyone running a node on a public testnet doing neither would actually only require minimal CPU (around 2 cores of CPU). And as SNARK constructions and proving systems improve over time, SNARK work is likely to become cheaper computationally, and more accessible in terms of what hardware can generate proofs at expected speeds. If a user decides to use their computing power to become a Snarker on the public network, they will receive SNARK fees as reward, see below image.

In the future, a special “non-consensus” node will be implemented that, while not participating directly in block production, verifies that the blockchain is secure without delegating any trust. This node will have such low CPU and memory requirements that it will even be able to run from JavaScript. Specifically, even mobile browsers on smartphones will be able to participate! 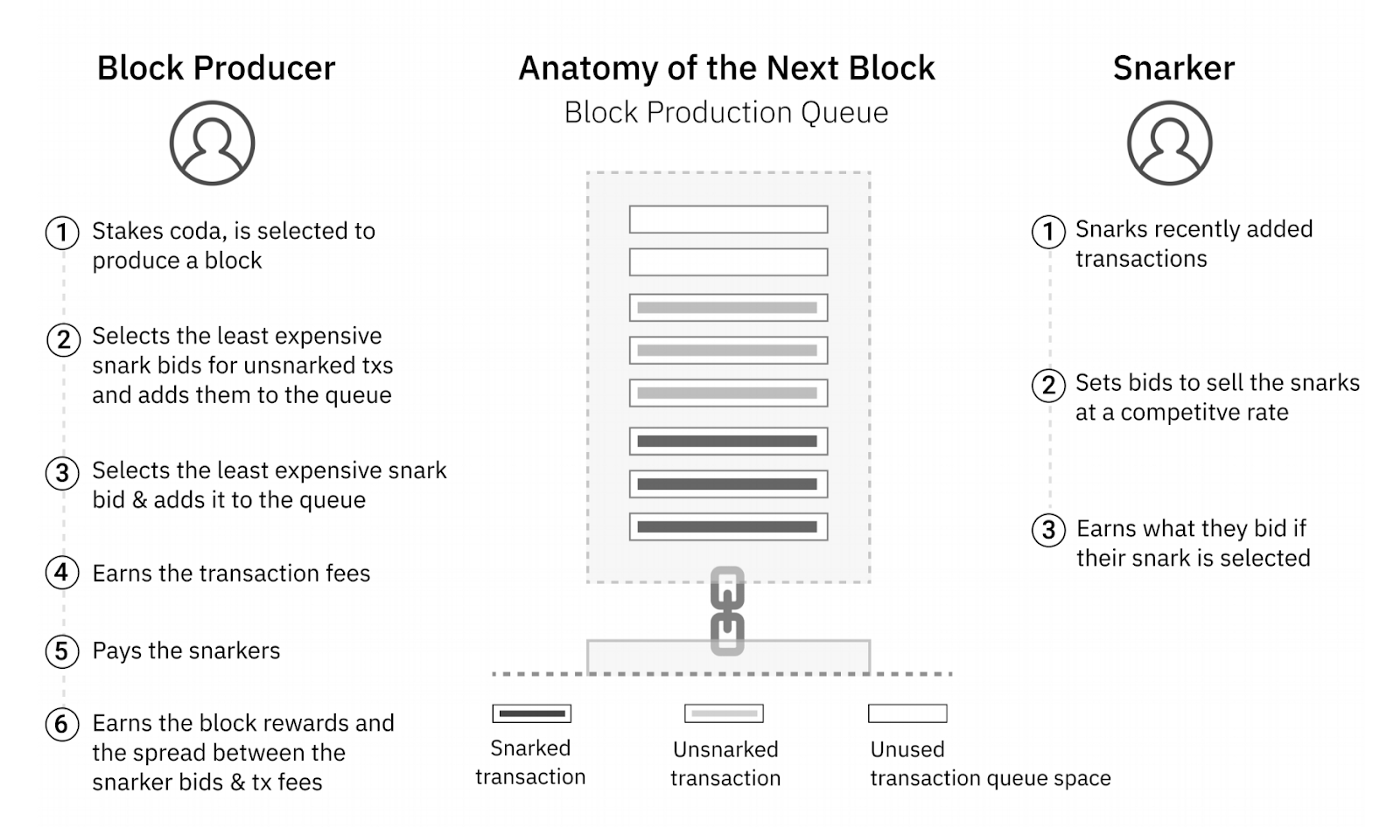 Key roles on Coda and their incentives: the block producers and the snarkers. For more information, check out the economic whitepaper

Based on the feedback that members submitted, here are some of the main takeaways from ‘Coda Sandbox’:

We’ve also compiled feedback from forum discussions on Sandbox’s other features, such as the GUI Wallet, Javascript Client SDK, decimaled tokens, and the ability to send coinbase elsewhere.

Our original hope was to launch a public testnet around this time, but due to some persistent bugs related to the p2p networking, we postponed it. Our intention is to bring a testnet to our community that passed our internal testing with 200 nodes, and will give the node operators a good user experience.

Therefore, in parallel to launching the Coda sandbox, we also formally kicked off our internal task force on improving our velocity for root-causing and iterating on bugs and features. Our sub-group task force is devoted to getting the public testnet ready.

Recently, we successfully ran a 200-node network internally for 3 full epochs and are running with more network simulations, such as ‘chaos’, where we kill nodes randomly, to see how the network reacts. Stay tuned on the #task-force discord channel, as we’ll be following up with more details on all the projects we’re thinking about. If you’re interested in more juicy, technical details, feel free to participate in the discussions or contribute!

Keep your eyes peeled on the #reliability-engineering Discord channel for bleeding-edge information on how the internal testnets are going, and stay tuned for news. You can sign up here for the Genesis mailing list to get notified when the public testnet goes live!

As always, we want to give our heartfelt thanks to our community for being with us on this journey, their help in improving the protocol and continuing to build Coda’s community of users! 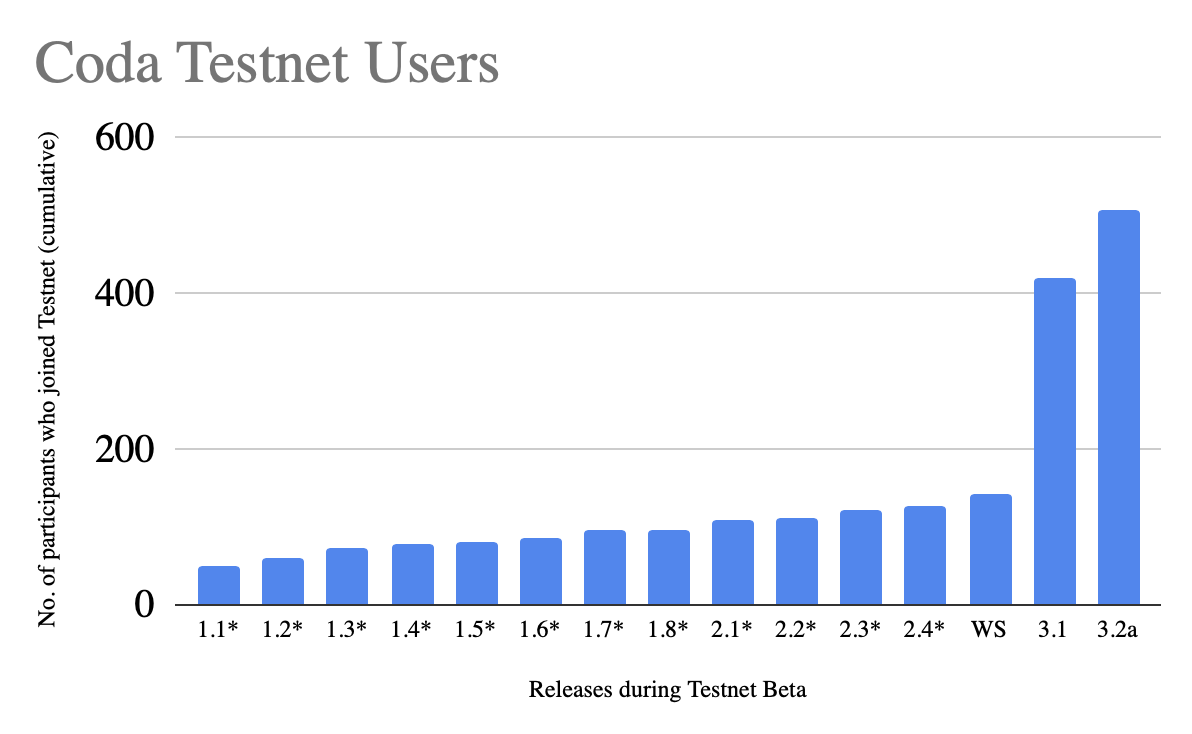 Top 10 users in release 3.2a, see Testnet Leaderboard for the entire ranking

*Testnet Points (abbreviated ‘pts’) are designed solely to track contributions to the Testnet and Testnet Points have no cash or other monetary value. Testnet Points are not transferable and are not redeemable or exchangeable for any cryptocurrency or digital assets. We may at any time amend or eliminate Testnet Points.