Tldr: We raised a new round of funding and over the next few months will be inviting users to become more deeply involved with Coda, a more accessible cryptocurrency. Scroll to the bottom to learn how you can participate.

We’re excited to announce that last fall, we finished a new round of funding for O(1) Labs! We raised $15M from a group of fantastic investors including Accomplice, Coinbase Ventures, Paradigm, and General Catalyst. These excellent funds, along with a few other high value-add investors are joined by additional support from our amazing seed investors including MetaStable, PolyChain, Electric Capital, and others.

Since day 1, we have been focused on radically expanding the reach of cryptocurrencies by addressing the root issues behind blockchain’s scalability challenges. We believe our solution to this problem, Coda, will greatly expand the level of decentralization available to a cryptocurrency and the applications it is capable of. Our team of nearly 20 has executed aggressively, and today we are excited to share plans around what’s next on our path to Coda’s launch.

When Bitcoin was created, it showed the world that it is possible to create any economic system we want, unbound by the historical limitations of nation states and large organizations.

Since then though, cryptocurrencies have run into a problem; as they have become more popular, control and usage has tended towards centralization. No matter what the chain, both consensus and usage has centralized towards large mining pools, delegated proof of stake, and trusted third party validation.

This is no coincidence. The fundamental technology underlying cryptocurrencies is their blockchains. As cryptocurrencies have grown in popularity, their blockchains have grown in size, in the process becoming unwieldy and forcing out participation from all except those with the capacity and willingness to dedicate serious compute resources to validating the chain. Even doing just a few transactions per second, the most popular cryptocurrencies have become hundreds of gigabytes in size. Some with more centralized consensus such as delegated proof of stake and unbounded throughputs have even reached terabytes.

Coda solves this problem. Leveraging zero knowledge proofs, it substitutes the traditional blockchain for a tiny, portable cryptographic proof, about the size of a few tweets. This means that anyone can get the same level of security as a standard blockchain with a tiny fraction of the requirements. Full verification of the chain is available to any device, and participating in consensus is highly accessible. And even better, as the proof is constant sized, using Coda stays inclusive and decentralized even at millions of users, thousands of transactions per second, and with decades of history. 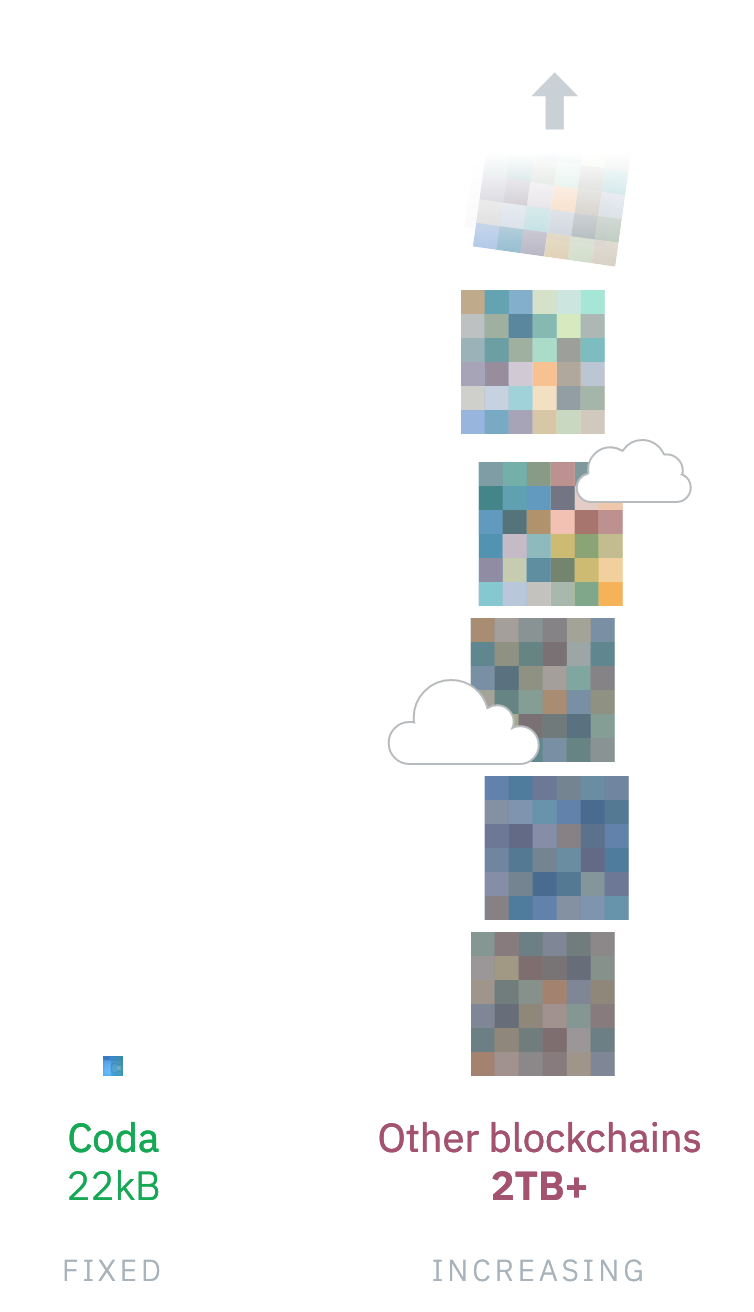 Coda takes this a step farther, as well. By reducing the size of the chain to be so small, Coda can be used from websites without requiring an extension and from mobile phones with intermittent connectivity, enabling an experience where anyone has the option to fully use cryptocurrency applications without intermediaries.

Developers will be able to reach users simply by dropping in a <script> tag into their frontend and writing a few lines of code, without requiring users to download extensions or trust any third parties. By taking advantage of this, developers will be able to build new websites and applications impossible in today’s world. A social network can prove it’s treating your data and privacy with respect. New kinds of games can be built leveraging the capabilities of a cryptocurrency. Communities can organize and make decisions with fully verifiable elections.

Through its tiny blockchain, Coda will make it possible to easily develop wide-reaching applications while being governed and validated by its users. We hope this makes a step towards allowing people to have more access and usability from a cryptocurrency.

Over the course of the past year, our team has made rapid progress towards making this vision a reality. A few milestones:

How you can participate

Over the next few months, we’ll be inviting users to become more deeply involved with Coda. We believe that there is a direct correlation between the strength of a protocol and how much agency and leadership its community has to shape its direction.

With Coda, there will be numerous ways for both technical and non-technical builders to get involved. We’ll be working diligently to distribute many of the key roles of running and growing of Coda to these early contributors. We're excited to take these next steps with you, so please sign up for any (or all) of the following if you’d be interested in joining in.

To build and expand on the technical foundations of Coda

To participate in running, securing and sharing the protocol

Finally - stay tuned for more posts on our plans to give governance of Coda over to the community, and what applications we will be building to showcase the capabilities of Coda.