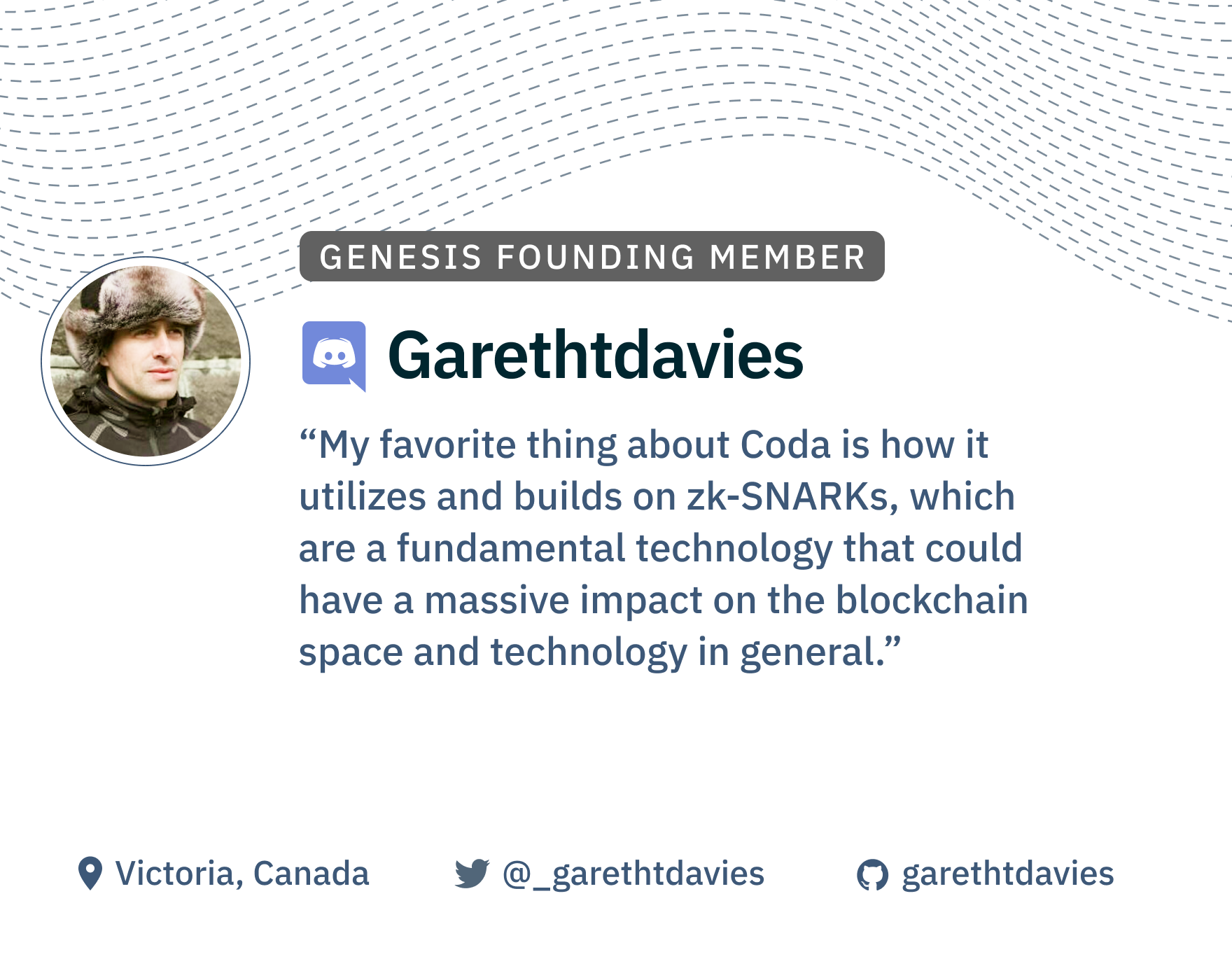 Gareth is one of 40 members in Genesis Cohort 1. There are still 960 spots open for hobbyist and professional node operators to join Genesis.

Gareth joined Coda's community in July 2019, right when the testnet was opened to public beta, due to his interest in learning more about zk-SNARKs. While playing around and testing features, he learned about the protocol, how to use GraphQL (an open-source query language for API), and applied his newfound knowledge to develop the first Coda block explorer. His block explorer is currently being used by many, if not all, testnet users! He is also an active member of the Zcash community.

(Interview has been edited for clarity)

How I got into blockchain:

My background is in engineering, but I got into blockchain around late 2013, when there was a surge in Bitcoin interest and price. I actually wrote about my experience back then on my blog, a post called "Bitcoin mining on Amazon Web Services (AWS)". After my interest was piqued, I explored several different projects, including Ethereum and eventually Zcash, while still in the testnet phase. I have been very active in Zcash since its launch and was awarded the Zcash Foundation Privacy Guardian Award for my contributions at Zcon1. In attending the Zcon0 conference in Montreal, I saw Izaak present on the Coda Protocol, and I've been involved with Coda ever since!

Why I joined the Coda Testnet:

In early 2018, Coda launched the private testnet, where you could play around by setting up a few nodes and send transactions back and forth but not much else. So by Coda's public testnet beta, I was raring to go! What drew me to Coda, ultimately, was the technology and zk-SNARKs. When I first heard about Coda, my mind was blown, and it seemed too good to be true! I was fascinated by the idea of a succinct blockchain, and so I had to learn more. Now I appreciate it more on a practical level.

My experience with Coda and the community:

I've had a great experience with Coda. For me, as I was in from the very beginning, the community was small and inclusive, so I could follow literally every conversation. I also felt, at that time, there were many meaningful contributions to be made, and there were just more "low hanging fruit" ways to contribute. It's fantastic that you're able to chat directly with engineers who work on Coda on Discord.

What about Coda excites me the most:

zk-SNARKs are a fundamental technology, and the development that Coda is doing on them could have a massive impact on the blockchain space and technology in general. Obviously, seeing Coda in the wild and being able to use it would be amazing. I personally work in edge computing, which involves working with a lot of constrained devices. So Coda is quite relevant and applicable for my industry, and there are many use cases involving payments and so on.

On the Block Explorer:

I built the block explorer because I was motivated by curiosity and trying to figure out how the protocol worked. Everything was so abstract, and I wanted to find a way to visualize it to understand better how everything fit and was linked together. When the first public testnet was launched, there were, as expected, many issues, and no authoritative resource you could consult to find out what was going on or what was going wrong. So I built the block explorer to help solve those problems. The entire Coda team was incredibly supportive, including Conner (a Coda protocol reliability engineer), who had developed a Python library that bootstrapped the explorer. The GraphQL API is a great resource, and the explorer mostly outputs this in a more pleasing format!

Other projects I'm participating in: Zcash

What I do in my free time:

I don't really have free time! I have a young family, so any "free time" is mostly dominated by LEGO.

Thank you so much for sharing your journey with us, Gareth! Be sure to go say hi to him on Discord and sign up for Genesis to be eligible for a Genesis token grant like Gareth.