Testnet Beta Phase 2.2 was a busy period, marked by a lot of tinkering and breaking. The community rose up to the challenge to increase the transaction throughput during 'Magic Window' hours, and a new bug soon came to the surface, which the team can now investigate. In the meantime, there are also notable technical developments in the protocol that will be rolled out with the new release of this week, called "Van-Helsing". We're excited to see how the testing with the community will go using these new components. If the community reaches a transaction objective together, we will reward everyone with 2X bonus points! Read on for more details and sign up here to receive testnet updates. 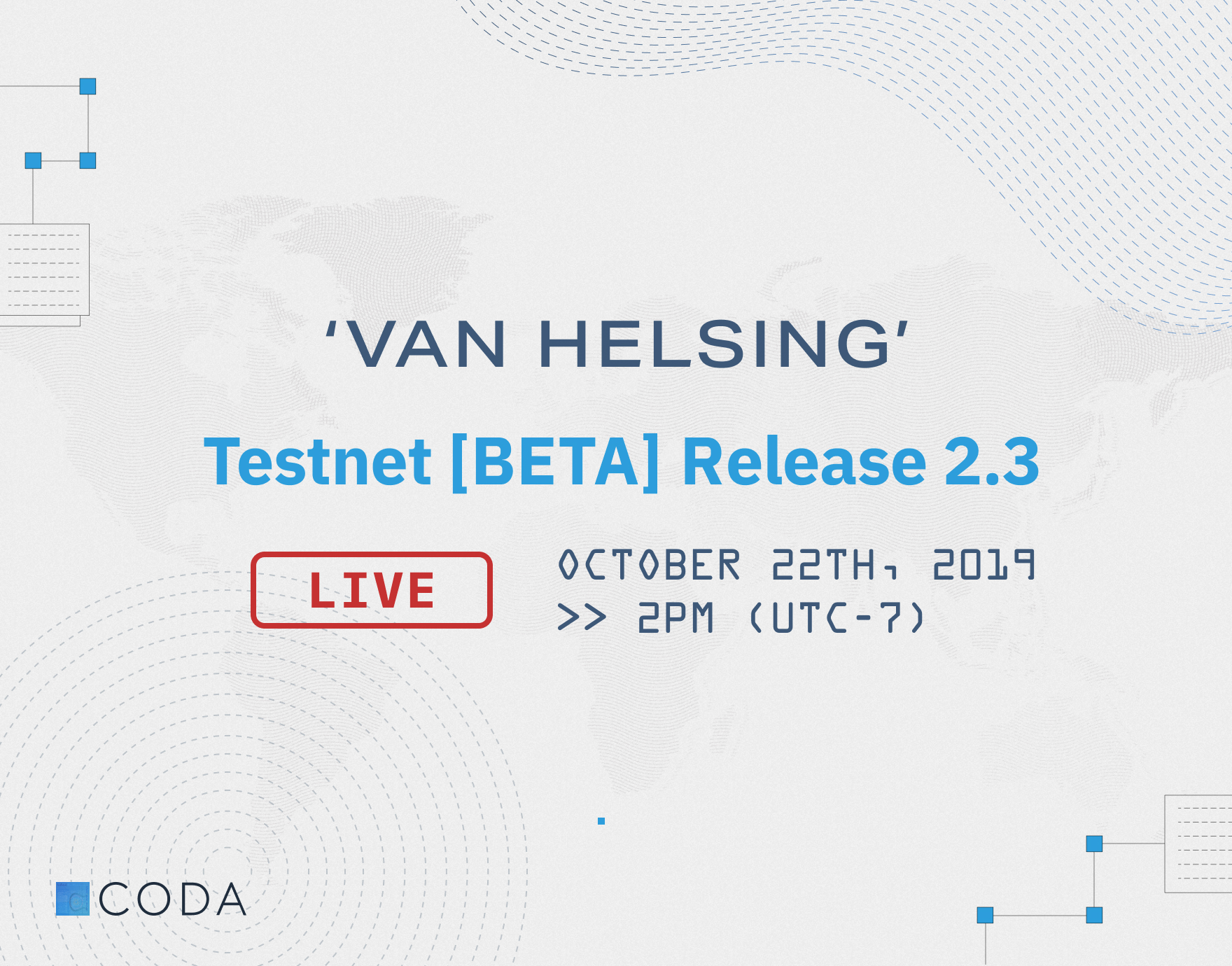 Retrospective Release 2.2 and Updates in 2.3

The community racked up more testnet points during release 2.2, reaching a total of more than 140.000 points on the leaderboard.

[BONUS] A co-op challenge for the community: if the objective of sending and including at least 1080 transactions in a block during a "Magic Window" hour is achieved, then everyone will get double points*!

There will be 4 one-hour windows in the week where node operators can do one of two things:

The 4 one-hour windows are:

Become a leader in the community and share your strategy for the "Magic Windows" challenge to get 500 points*. By sharing your tactics to send more transactions and sell more snarks, you'll help the community stress test the network more effectively. Feel free to share your strategy on a platform where the community can easily find it and get organized, for example - share a link to a new forum post at forums.codaprotocol.com in the #testnet-connected / #testnet-general channel.

-Introduction on Discord for 100 pts*

Retrospective Release 2.2 and Updates in 2.3

Release 2.2 continued the staking challenge from the previous release, and also added a challenge to stress the network with transaction throughput and increased SNARK generation. We updated the testnet parameters to allow for increased throughput, and discovered a bug where nodes went into long blocking compute cycles where they did not respond to messages from peers. When this happened frequently enough, peers ended up banning each other, leading to dropping peer count. We also believe this may have exercised some unusual race conditions in communicating with our gossip network process.

The root cause of this is thought to be two potential issues:

We're still investigating this issue, and will share more as we debug. Follow along in the #testnet-operations Discord channel for live updates.

Since the launch of Testnet Beta Phase 1, we've seen many people join Coda's community and felt their positive energy. We're very happy to be able to work closely with highly energetic and passionate members, like garethtdavies, pk, whataday2day, kunkomu, gnossienli, and many more. Together with the community, we're strengthening the protocol during every testnet release and working towards the first succinct blockchain to achieve true decentralization at scale.

Gnossienli noticing the steady progress of every testnet release

Testnet MVPs pk and Ilya | Genesis Lab were ready at the starting line of testnet release 2.2

We also want to give a special shoutout to the newest asset in our community, CrisF. He joined the testnet recently, gave us helpful and detailed feedback, and even already found a bug!

We're truly grateful for all the interest and support from the community. It is very encouraging and a great motivation for us, and we will keep marching towards a robust mainnet candidate together. If you or if you have friends who want to join the community, then get started here and join us. We look forward to growing the community together.

Every release, we will reward community members who are making testnet a great, collaborative experience. Please join us in congratulating the winners of release 2.2!

Check out the leaderboard for all winners and earned testnet points*.

Our entire team is grateful for the community's active participation in making the testnet a positive experience for everyone. We are working hard to iterate and work towards a robust succinct blockchain. Stay tuned for more exciting things in the public Testnet Beta and see you over on Discord!