Phase 2 of Coda's Public Testnet Beta kicked off with a lot of interest in the staking challenge. 70 people signed up to stake on the new release and about 50 people ran a testnet node. Together, the community was going strong and racked up almost 100k testnet points* on the new Phase 2 leaderboard. Want to stay updated about Coda's testnet? Sign up for testnet updates here. 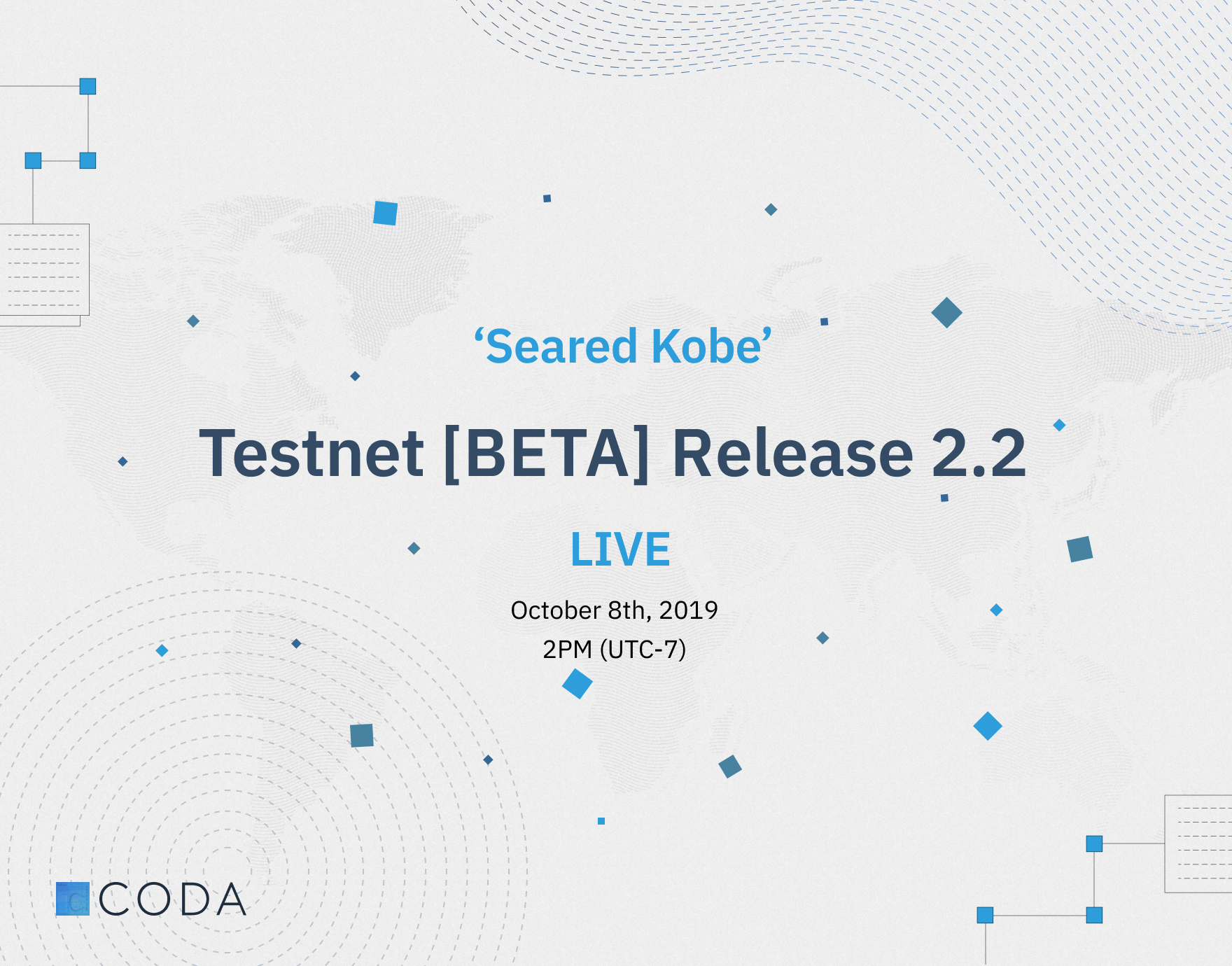 Retrospective Release 2.1 and Updates in 2.2

Release 2.2 of the Coda public testnet beta launched on October 8th, at 2pm UTC-7. This week's release is called Seared Kobe, and features a re-run of the staking challenge, new challenges for sending transactions and creating zk-SNARKs, and a BIG bonus for the entire testnet community if we reach an objective! Read on for details:

This week, we will have a co-op challenge for the community!

We're shipping a GUI wallet that will allow you to begin sending and receiving coda! Without having to touch a terminal (well almost), see GitHub.

Please let us know about your experience by providing us with feedback on the GUI wallet.

-Introduction on Discord for 100 pts*

Retrospective Release 2.1 and Updates in 2.2

Phase 2 kicked off with a new release Filet Mignon, which featured a staking challenge where Coda nodes had a chance to compete for the title of top Block Producer. Here are the quick numbers: 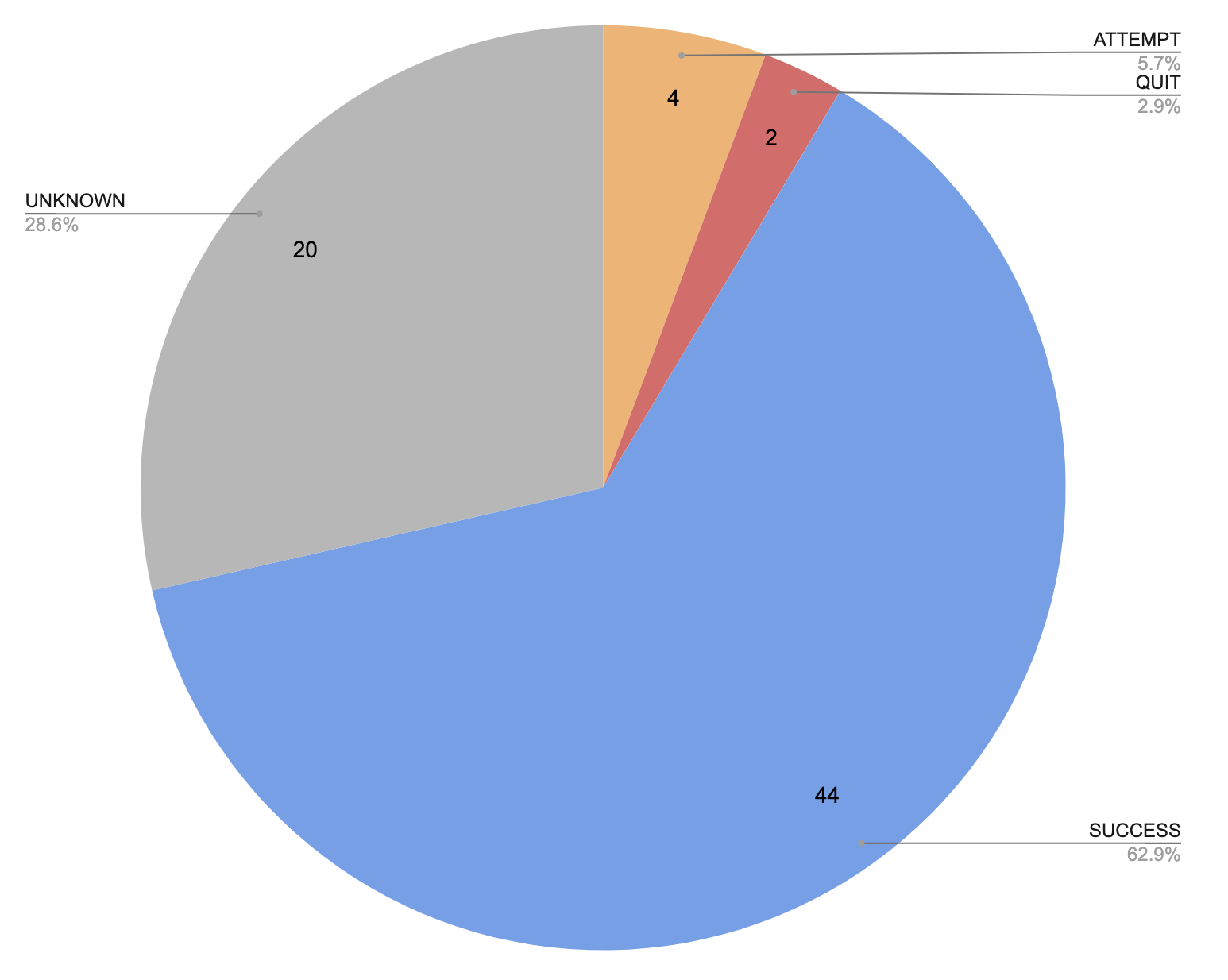 As you can tell, over 50% of sign ups were able to successfully produce blocks and participate in consensus, resulting in the largest staking testnet thus far. In addition, the network was remarkably stable over the 2 weeks, despite almost 50% of stake belonging to community node operators. We are grateful to these highly technical community members for their hard work on the testnet.

Notes from the week:

This week's release 2.2 features two improvements to the user interfaces that node operators can use to spin up a Coda node:

As always, we continue to stabilize the protocol and add features in each testnet release cycle. Thanks again to the node operators and community for supporting and working to develop and grow Coda.

In the first release of testnet Phase 2, we see a number of new names around in the community on Discord, where our team and the community hangs out. The below quotes show what drove people to join the Coda community.

It's cool to see members dive in enthusiastically. After all, as gnossienli points out, what is a better way to learn about the first succinct blockchain than to try it out yourself?

Another new member, Eosgermany, was attracted to Coda, because of its uniqueness and the use of zk-SNARKs in the blockchain.

We welcome everyone with different kinds of backgrounds to join our community and to learn from each other, like our new member Kunkomu.

Besides the new members, our testnet veterans are still going strong. Our community MVP pk takes the staking challenge very seriously and did his best to learn from other community members and to find a way to win more opportunities to produce blocks on Coda Protocol.

It was fun to see how Phase 2 of Coda's public testnet Beta kicked off with the testnet users brimming with excitement. We are looking forward to continuing improving Coda Protocol together with the community.

Every release, we will reward community members who are making testnet a great, collaborative experience. Please join us in congratulating the winners of release 2.1!

Our entire team is grateful for the community's active participation in making the testnet a positive experience for everyone. We are working hard to iterate and work towards a robust succinct blockchain. Stay tuned for more exciting things in the public Testnet Beta and see you over on Discord!