Coda Protocol's Phase 1 of the public Testnet Beta has concluded! We had 8 successful weeks of testnet on a 1-week release schedule. The technical advancement that was made would not have been possible without the participation of enthusiastic members in the community.

Some important milestones that we hit include:

After Phase 1, we will progress to more stable, and scalable testnet releases and will move from a rapid iteration cycle of a 1-week cadence to a 2-week cadence to support this, read on to check out what new and exciting things to expect, and sign up here to be notified via email when public Testnet Beta Phase 2 is open! 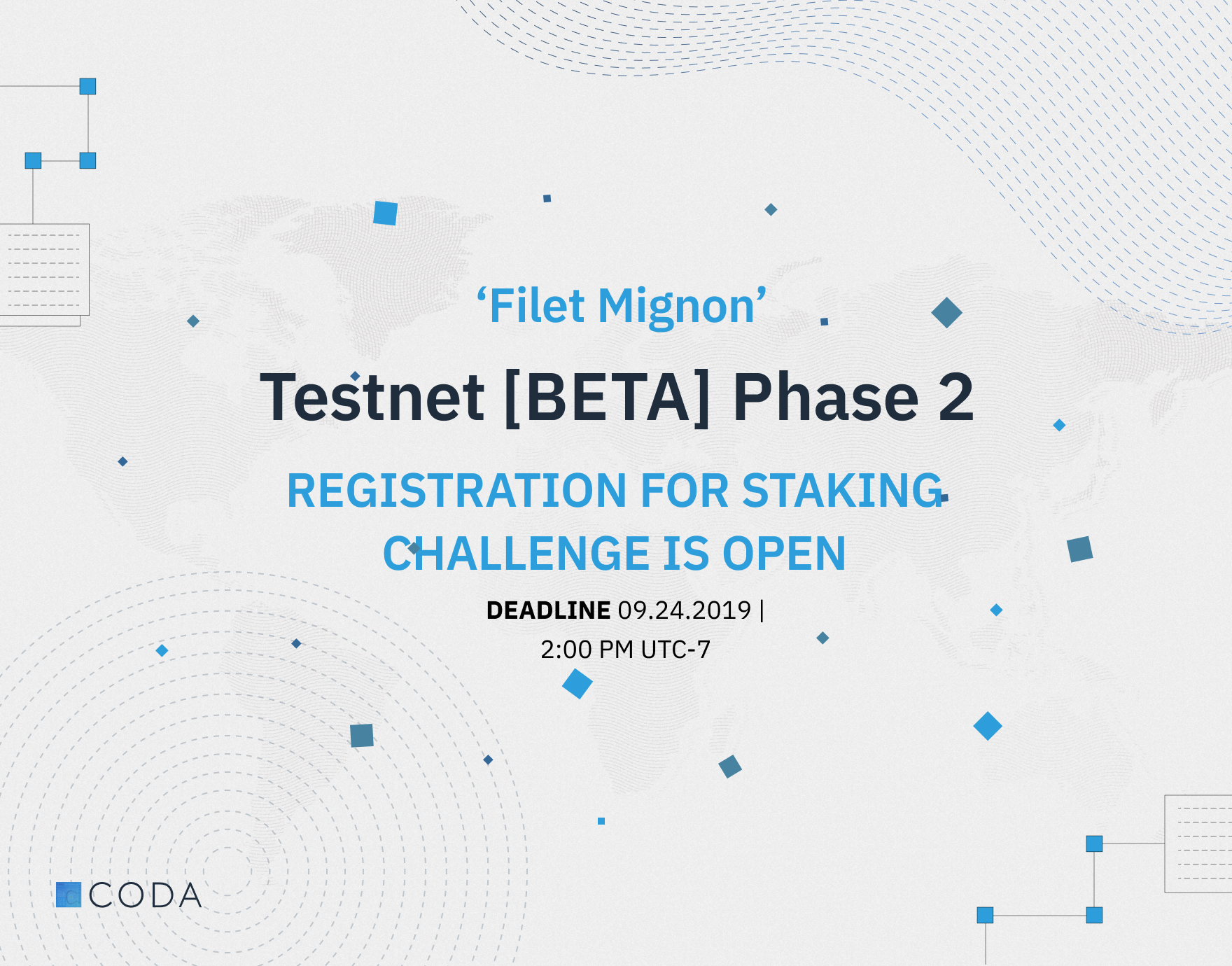 Phase 2 of the testnet will begin on September 24th with the first challenge, Filet Mignon. Registrations for this Staking Challenge are open here until September 24th 2pm UTC-7! Sign up to stake on the genesis block of Testnet Beta Phase 2!

In Phase 1 of the testnet, we had one-week release cycles which gave us a chance to test out the feature-set in Coda and ensure that everything worked. In Phase 2, we're switching to two-week releases to build upon Phase 1's successes. Two-week release cycles will enable Coda developers to focus concurrently on maintaining the durability of each network, while also prioritizing feature development and protocol improvements.

Goals for Phase 2 include:

Let's take some time and reflect on the remarkable testnet metrics from the past two months:

In addition, Phase 1 of the public testnet featured two significant firsts for cryptocurrencies:

Both of these technical achievements tested in practice helps harden and march towards a strong mainnet release candidate for Coda. We look forward to seeing even more technical developments and accomplishments from Phase 2.

It was incredibly fun to see how users became leaders in he community and how passionate they were with being involved early in the development of Coda Protocol. Members steadfastly showed up in full force every week for the testnet releases, completed challenges, and built exciting things for the Testnet Beta. We want to give a special shout out to these highly technical leaders in the community and reward them with a head start on the Phase 2 Leaderboard. Please join us in congratulating them!

We also want to put the community spotlight on the following very cool things that community members built and created. Make a note of these tools and guides, as they might come in handy when you're going to set up a node on public Testnet Beta Phase 2!

Our entire team is grateful for the community's active participation in making the testnet a positive experience for everyone. We have been working hard to get Coda Protocol to the state it is today, and it has been exciting and fun to see you testing it! Stay tuned for more exciting things in Phase 2 and see you over on Discord!